A review of Bacon Mac N’ Cheese from the Fifty Shades of Bacon cookbook.

For this recipe, you need to actually make bacon bits in advance.  It’s not hard though – just cook up the bacon until crispy, and then either chop them up really small or toss them in a food processor. 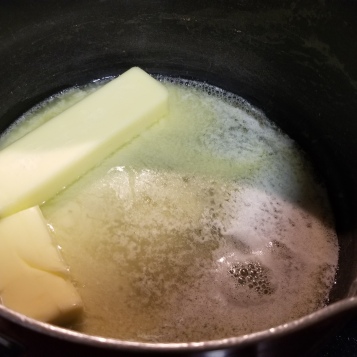 While the macaroni cooks, the cheese sauce can be prepared.  Butter is melted first, followed by flour, salt, and pepper.  Once the flour is thoroughly incorporated, cream is added first and then the cheeses.  Once it’s all melted and blended, toss in the bacon bits!

The macaroni and cheese sauce is combined, put into a baking dish, tossed with a bread crumb / melted butter combination, and thrown in the oven until bubbling and delicious.

Very good, but I honestly would have preferred it without the bacon.  But then again, this IS a bacon cookbook so it has to be in there!

This is very close to being “easy”, but you’ll need to be careful not to burn or curdle the cream.

I had to fight tooth and nail for this tiny 7oz. package of macaroni due to the COVID-19 grocery raiding.  Totally worth it!