A review of Maggie’s Forkless Apple Pies from The Walking Dead Cookbook. 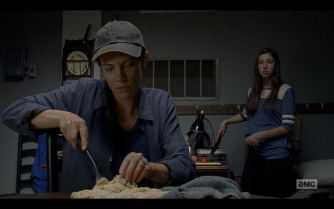 This apple pie is in reference to Season 7, when a pregnant Maggie devours a slice of pie from Sasha with her bare hands.  These, however, are wrapped up in a way that a fork isn’t even needed!

First the dough is prepared.  The dry ingredients are mixed together, and chilled butter is incorporated with a pastry blender.  Ice water is added tbsp by tbsp until the whole mixture holds together, and then it’s moved to a floured surface where it’s split in half.  Each half is shaped into ball, flattened into a disc, wrapped in plastic wrap, and stored in the fridge for at least 30 minutes. 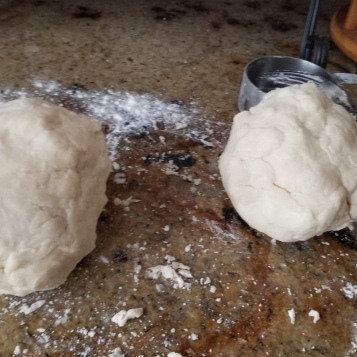 Once you’re ready, all the filling ingredients are mixed together.  Each dough disc is rolled out and cut into four circles with a 6-inch round cookie cutter.  I didn’t have one of these large cutters, so I cut each disc into approx. 4 pieces and did my best to make somewhat-even circles.  I’m certainly not going to say they were perfect, but they were functioning! 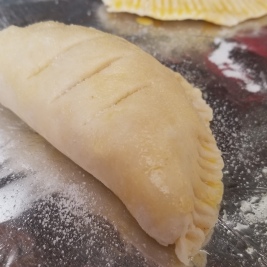 An egg wash is spread on one half of each circle, some filling is added, and then dough is folded over.  The edges are sealed by pressing with your fingers, and then crimping with a fork to make sure it holds.  Three slices are cut into the tops of the pies, and they are brushed with more egg wash and sprinkled with sugar before going into the oven until golden brown.  For me, this was a little longer than what the recipe called for (about 3-5 minutes).

These were good, but I thought there was too much crust and not enough filling.  The challenge with hand pies, though, is you can’t overfill them or you won’t be able to seal them properly!  In the future I might roll the dough a little thinner.

They were very convenient to eat, though!

Dough is always a little tricky.  This one definitely isn’t the most challenging I’ve dealt with, but you do need to be careful about it sticking and making sure you add enough water so it doesn’t crumble too easily.

There are a lot of ingredients involved here, but luckily many are quite common.  Ingredients include flour, sugar, salt, butter, egg, apples, lemon juice, cornstarch, cinnamon, nutmeg and allspice.