Sophie, if you don’t recall, is Susan’s mother in the show.  I opted to make the Pasta with Light Tomato Sauce with Sophie’s Meatballs, so I can review both recipes in one go!

I started with the meatballs.  First the chopped onion is cooked over the stove, and left to cool slightly in a bowl (so it doesn’t cook the egg once added).  Once it’s warm, the egg and parsley are beaten in.  Finally, the rest of the ingredients are mixed in and the whole thing is put into the fridge for 15 minutes so it’s easier to form the meatballs. 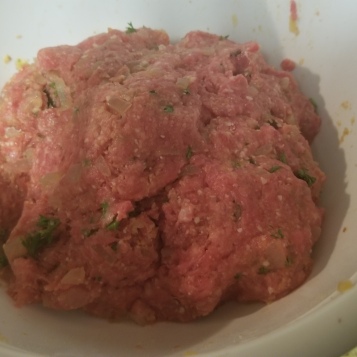 While the meatballs cooled, I chopped up the onions for the pasta sauce and got out all the ingredients I would need.

After 15 minutes, the meatballs are formed (I made about 12) and broiled for 6-8 minutes.  Mine were still quite pink inside, so I followed their suggestion of baking them at 350 a bit longer – I did about 8 minutes more, and then they were finally cooked through.

For the pasta sauce, the onion is cooked over the stove first, followed by garlic, oregano and red pepper being added.  After a couple of minutes, the rest of the tomato sauce ingredients are added as well and the sauce simmers for 20 minutes.

Once the 20 minutes is up, I heated up a pot of water to boiling for the pasta, and put the meatballs into the sauce to simmer for 20 minutes.

The final step is to mix fresh parsley (or basil) into the sauce (I removed the meatballs first so they don’t fall apart), ladle it over the pasta, and throw in a handful of Parmesan.  I had plenty of sauce leftover, enough for an entirely new batch of pasta. 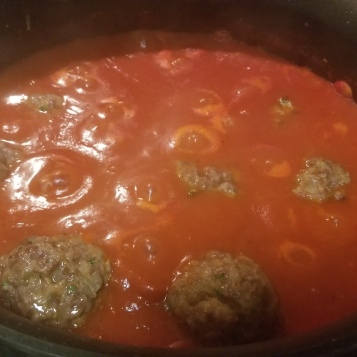 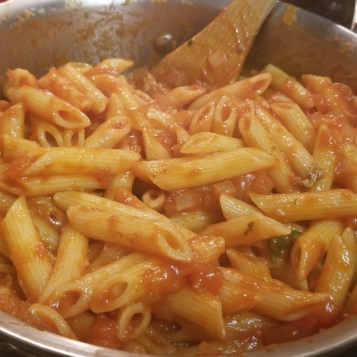 Since I used penne instead of spaghetti, one of the three noodles the recipe suggests, I opted to serve the meatballs on the side instead of on top.

Both the meatballs and pasta were very good, but just didn’t have that extra something I was looking for.  Still delicious, though, and I was happy with how they turned out!  The pasta is especially good with the meatballs included, and I liked the little bit of kick in the sauce from the red pepper flakes.

The meatballs can be tricky, both forming them and making sure they’re cooked all the way through, but they’re suggestion of refrigerating the meat first for 15 minutes does help with the shaping part.

For the pasta, there’s a lot of chopping and timing it right so that the pasta or sauce doesn’t finish before the other.