A review of “Luggabeast of a Quiche” from The Star Wars Cookbook: BB-Ate

Luggabeasts are a mechanical beast in Star Wars that can be rode by smaller creatures in the galaxy.  It does exactly what it sounds like – lugs things around.

This is basically a crust-less quiche, except for some bread crumbs scattered around the base of your pie dish (on top of butter to make sure the crumbs stick).

Sausage is then cooked over the stove, followed by onion and mushrooms.

In a bowl, the eggs and milk are whisked together, and then cheese, the cooked sausage, the cooked vegetables, and garlic powder are mixed in.  It’s poured into the prepared pie dish and cooked until eggs are set. 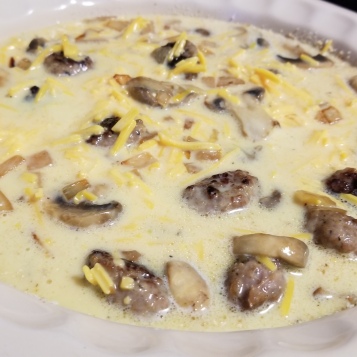 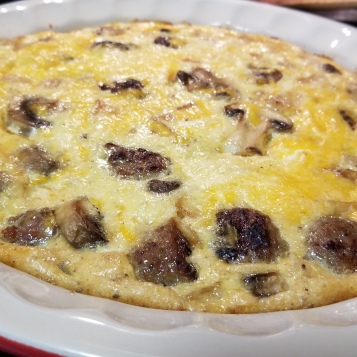 My oven always takes longer than the recipe claims, so it took about 38 minutes for my quiche to set instead of the 30 minutes listed in the recipe.  And honestly, it probably could have used just a couple minutes longer.

Then the quiche rests for about 15 minutes before you dig in!

I don’t even like mushrooms, but this was delicious!  It’s hard to go wrong with that much cheese.  The cheese and onion were my favorite part of this!

You’ll need to do some chopping and cooking over the stove, and you’ll need to be able to tell when the quiche is set and ready to remove from the oven.