A review of Irresistible Brownies from Lynette’s Section of the Desperate Housewives Cookbook. 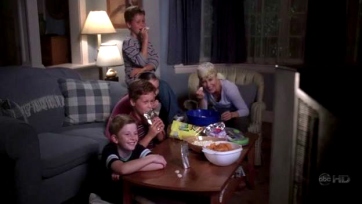 This recipe might be in reference to those pot brownies that Lynette’s mother secretly bakes for her in Season 4, to help her deal with some of the chemotherapy side effects.  Lynette, not knowing there was pot in those brownies, then shows up to Susan’s party completely stoned!

OR it could be in reference to the laxative-laced brownies that Lynette bakes for Tom in Season 7, as one of her many revenge plots against him sleeping with someone else 20 years ago.

This recipe starts off with melting chocolate, butter and sugar together in a double boiler…yummy!

The rest of the recipe is fairly simple – dry ingredients are combined in one bowl and the wet in another, then the two are mixed together and nuts (if using) are folded in as well. 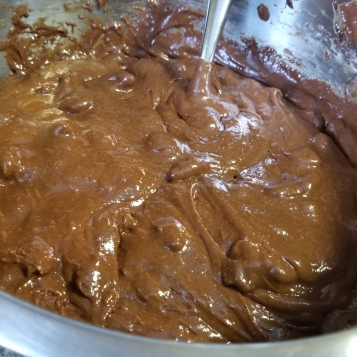 The mixture is poured into a buttered baking dish and baked until done.  They make a note that the toothpick will not come out clean with these!

I was a little impatient and my first taste test was before the brownies had completely cooled, as the recipe suggests.  I gave them an 8/10 at that point.  Then I tried the brownies again once they’d be refrigerated, and they were bumped up to a 9/10.

I’m glad I added walnuts to these, and I think that made them taste better.  They’re still not a favorite, though.  I’m curious to try them with bittersweet chocolate instead of semisweet to see if that makes much of a difference.

Most of this recipe is pretty easy to put together, but you’ll need to monitor the double boiling of the chocolate to make sure it’s completely melted through, doesn’t burn, and that the water below never touches the bottom of your bowl/pot.

You’ll need semisweet or bittersweet chocolate (I used semisweet), sugar, butter, flour, baking powder, eggs, vanilla extract, and the chopped walnuts or pecans are optional.  The reason I’m giving it a combined cheap & average rating is because many people will have these ingredients in their pantry already.