A review of Apocalyptic Eggs Benedict from the Unofficial Hunger Games Cookbook.

The last time I made Eggs Benedict we absolutely loved it, even though it wasn’t a very traditional version of the breakfast dish, so I was excited to try it again with a different recipe – both a different meat, and a different way of making the sauce.

This recipe is based off of the “eggs” that Katniss ordered before the Quarter Quell, in Catching Fire Chapter 16.  The cookbook assumes, since the Capitol is fancy and likes rich food, that something similar to this is most likely what she was served.

There are four steps to this one: making the bacon, making the sauce, prepping the English muffins, and poaching the eggs.

Bacon is easy – cook as usual and cut in half.

The sauce is basically throwing the ingredients into the blender, but the butter and lemon juice are added slowly instead of up front with the rest.  Though easy to prepare, it is not as thick as the Hollandaise sauce I’ve had in the past. 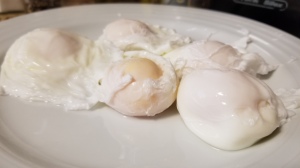 English muffins are just a matter of toasting the muffins and buttering them.

And finally, poaching the eggs is putting eggs (carefully) into boiling water that’s had vinegar added and letting them cook a few minutes.

Easy, right?  The hardest part for me was making sure it all finished at around the same time so that it stayed warm! 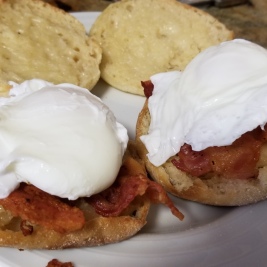 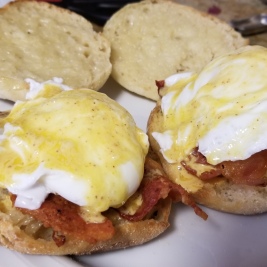 Then everything is layered – buttered English muffin, bacon, poached egg, Hollandaise sauce, and a sprinkle of chives on top. 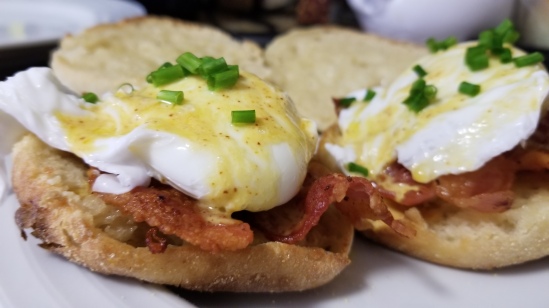 Delicious!  Definitely different than the last Eggs Benedict we made, but still amazing!  It has a little bit of kick from the cayenne, and the chives were a really nice addition as well.

Surprisingly easy recipe for Eggs Benedict!  It doesn’t come together too quickly, but is simple enough to prepare.

You could reduce the number of English muffins by half, serving one egg on each half instead of making a sandwich out of this.  The recipe actually doesn’t even mention “sandwiching” the egg, but because they had me prep four muffins I had four extra tops left over.  Eating as a sandwich means using your hands (though messy!) instead of a fork and knife, but the taste is the same so it’s up to you!

You may also want to reduce the amount of sauce you make as we had a lot left over.  I definitely could have poured more sauce over these eggs, but there still would have been quite a bit left behind.