Cookbook Reveal – The Necronomnomnom: Recipes and Rites from the Lore of H. P. Lovecraft

A brief overview of the cookbook I will be reviewing – The Necronomnomnom: Recipes and Rites from the Lore of H. P. Lovecraft

I used to drive 1 hour to and from work every day and so, to help pass the time and prevent frustration while I was stuck in traffic, my husband used to read me stories over the phone from the Necronomicon as I drove.  About a year later, my friends started hosting a monthly game night where we played Arkham Horror, Mansions of Madness, and other board games based on the writings of H.P. Lovecraft.  So needless to say, I was super excited when my husband bought me this Necronomnomnom cookbook.  And might I add, I find the title of this cookbook absolutely hilarious!

This is a parody cookbook, so rather than taking recipes directly from the stories the dishes are meant to look or sound like they would be found in the H. P. Lovecraft universe.

The Necronomicon, or “Book of the Dead,” is a fictional textbook of magic that appears in many of H. P. Lovecraft’s stories.  The Necronomicon book that we have at my house actually includes several of the stories, rather than functioning as a textbook.  Most people have heard “Cthulu,” but Cthulu is only one of the numerous monsters and creatures created by the famous horror writer.  The famous horror writer has filled his stories with creatures, magic, cults, and more, and his writings have led to numerous spin-off games, movies, television episodes, and music.

This cookbook looks like a work of art.  It’s beautiful.  The cover looks like an old and expensive textbook, with raised designs and gold writing.  Inside the cookbook, each recipe includes hand-written scribbles, titles and information along with drawn images of the food and drinks you’ll be making.  The ingredients and instructions themselves are typed, however, to make sure you can read it.

Beyond just looks, great detail was put into making the text sound like it is straight out of one of H. P. Lovecraft’s stories.  Ingredients include “high purity unrefined oils of the Oleacae species” (extra virgin olive oil) and “The Consuming Ebon Ink” (black food coloring), and an example of the instructions is: “May those who remain, be pressed firmly into service to thee upon the baking vessel, slick with fat” (press the remainder firmly into the greased baking pan).  But not to worry – you don’t need to decipher the ingredients and steps on your own!  The second half of the cookbook has the recipes re-written in plain English. 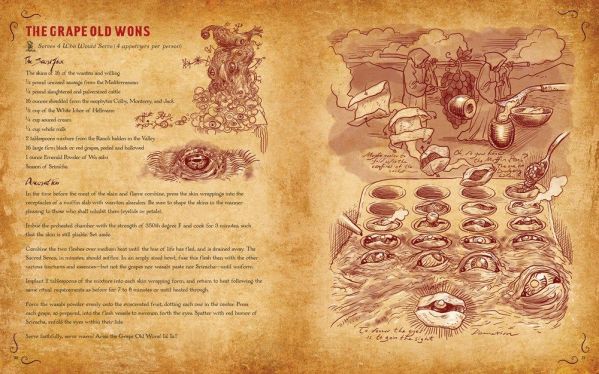 These are the recipes I’ll be testing: 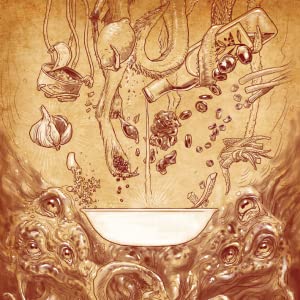