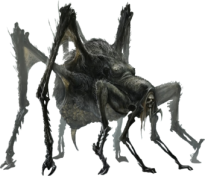 In the Lovecraft universe, the Atlach-Nacha is a giant spider creature with a human’s face.  So this recipe actually makes spider-like creatures out of your nachos! 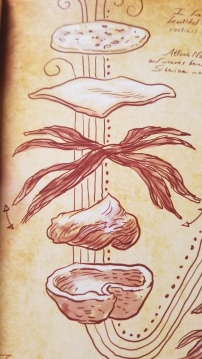 I chose to just use round tortilla chips, but I do think these would look better with either the cups or both the cups and the round chips.

The recipe says to use cooked shredded brisket or pulled pork or chicken – we used storebought pre-cooked pulled chicken, but since it was already seasoned with a Jack Daniels sauce I’m sure this affected the taste (making it a bit sweeter). 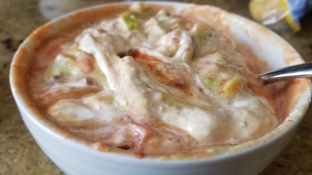 The meat is mixed with taco seasoning,and separated into several bundles (one per Atlach Nacho)., and the salsa, guacamole and sour cream are combined carefully – swirled, not mixed.

The salsa mixture is added to each chip (either on top or in, depending on the type of chip you’re using), and then the meat shreds make an “X” across the shell for the spider legs. 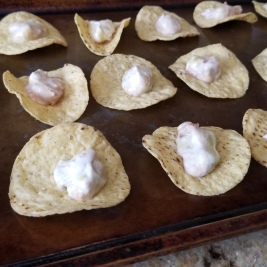 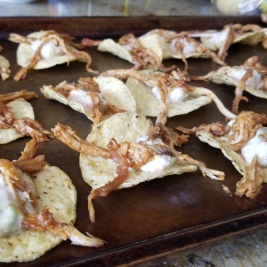 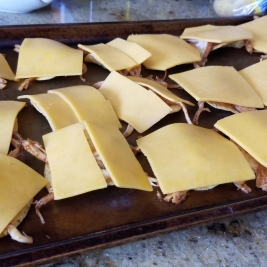 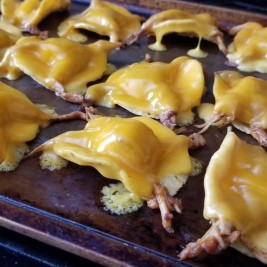 I struggled with the meat “X,” since the meat I was using had a lot of small shredded pieces instead of long ones, and I gave up about halfway through making these.  So I ended up with half the nachos than the recipe calls for.

Finally a slice of cheese covers the meat and the chips are baked to seal in the contents.  If you follow the picture, it looks like this all happens in the tortilla cups, and then the round chip is added on top of the cheese. 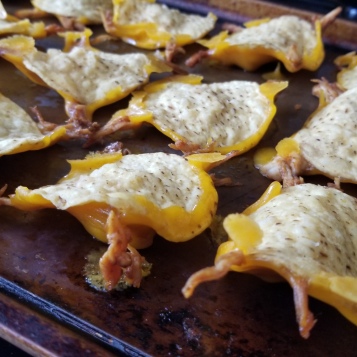 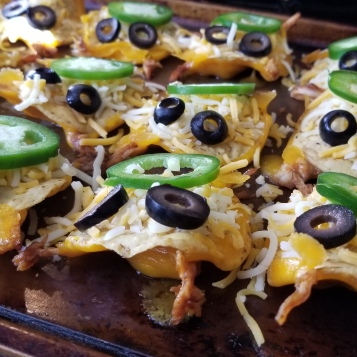 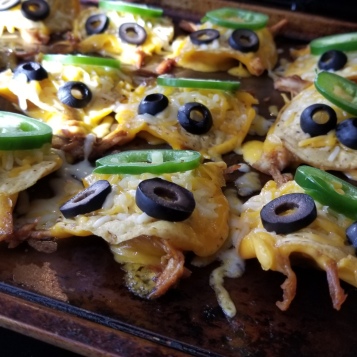 Once the chips are cool, they’re flipped over, covered in shredded cheese, and olives and jalapenos are added to create eyes and a back.  Back into the oven it goes until it’s completely cooked. 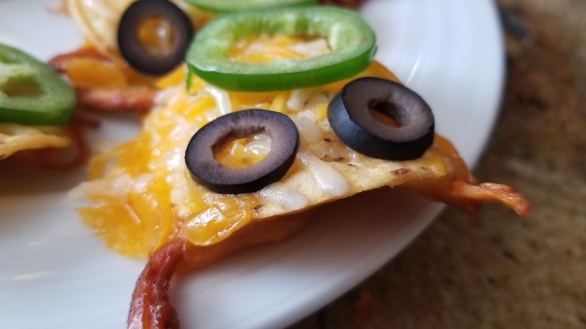 These took a lot longer to make than I’d like for nachos, but they did taste really good.  I particularly liked the salsa mixture in the middle.

I don’t love olives, so while I did try a few with the olives on top I ended up picking off most of them – thankfully that was easy to do!  And as mentioned early on in my review, we used pre-seasoned pulled chicken which made our meat a little sweeter than it would be if you cooked the meat yourself. 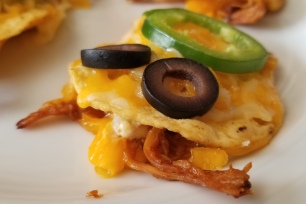 I found working with the pulled meat extremely challenging and frustrating, but it’s possible that using a different brand of meat or using meat you cooked yourself would make it less difficult.  The meat I used had a lot of small pieces, and using the 1/2 pound they called for did not seem to be enough to get 36 “X” shapes.  I ended up only making half.