This is a pretty simple dish to prepare, but know that you’ll need to constantly stir the sauce once you get it going so it’s helpful to either have someone else assist with draining the pasta or cook the pasta in advance and keep it warm (or you can always reheat it while tossing with the sauce).

The recipe suggests you partially freeze the bacon first to make it easier to cut.  I skipped this step because I didn’t want to wait for the bacon to start freezing.  I also didn’t care about the bacon being perfect 1/4-inch bites.  It probably took a bit longer to chop up than it would have, but it wasn’t so bad. 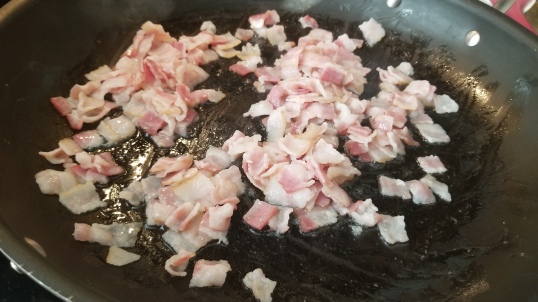 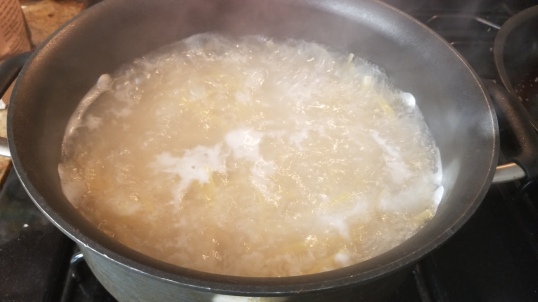 The bacon is cooked and drained, and I got started on the pasta boiling at the same time. 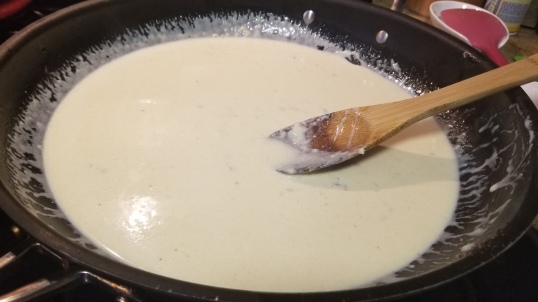 While the bacon drains, the butter and garlic are cooked over the stove, followed by heavy cream slowly being added to the pan while stirring constantly.  Next, the cheese are added – I used both parmesan and gorgonzola, but the recipe does list the gorgonzola as optional (I recommend including it!).

Finally, once the cheese is all melted, the bacon is tossed in followed by the pasta.

This is nearly an easy dish, but you will need to make sure you’re constantly stirring the sauce so you don’t burn the cream or cheese.

This recipe says you can use any kind of pasta.  If you’re looking to make a more traditional alfredo, I’d recommend linguine or fettuccine (I used fettuccine) – basically long string noodles that are wider than regular spaghetti.

I’d also recommend adding the gorgonzola to this recipe!  It really elevates the flavor in my opinion.