A review of Trudy’s Rib Eye in the Pan from The Unofficial Mad Men Cookbook.

Trudy’s Rib Eye in the Pan 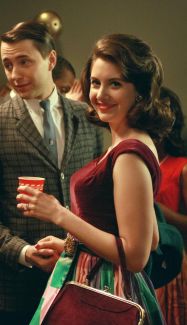 Rib Eye in the Pan with Butter was what Pete asked Trudy to make for dinner in Season 1 Episode 3.  He was just recently married, and seems excited that dinner’s actually going to be ready for him when he gets home!

You’ll need a pan that can go both on the stove and in the oven.  It actually calls for a cast iron skillet, but I didn’t have one.

The skillet/pan is left in the oven while you cover the steak(s) in pepper, and then it’s placed on the stove and the steaks are seared for about 30 seconds on both sides.

Then the skillet with the steaks goes into the oven for about 4-5 minutes, flipping halfway. 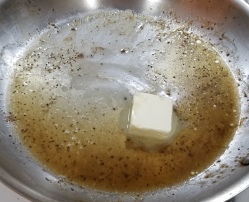 While the steaks are resting under foil, cognac and butter are melted in the pan and used to deglaze it.

The steak is served with the cognac/butter sauce poured over top.

I thought this steak was kind of boring.  The butter was nice, but I wish you could taste the cognac a bit more.  It was basically just a slab of meat with pepper.

It tasted a bit better once I added salt, which was strangely not included in the recipe.

Be careful when working with the hot skillet, but this recipe is pretty simple overall.

You’ll need to purchase a steak (or 2) and cognac, and possibly canola oil, butter, and/or black pepper as well.  The cognac is what might make this pricey for you…I wasn’t able to find a bottle under $35.