A review of Cracked Eggs Benedict from the True Blood Cookbook.

Today is my husband’s 30th birthday!  Since breakfast is his favorite meal, I decided to fix him a breakfast I knew he’d love: Eggs Benedict.

This is one of the more complex recipes in the True Blood cookbook, so I had opted not to attempt it during the initial cookbook review.  But a special occasion calls for special recipe!

This recipe is in the cookbook for the character “Eggs Talley” who’s real name is actually Benedict Talley, but was nicknamed Eggs because of this very meal.

There are three parts to this one: Boudin patties, Hollandaise sauce, and fried eggs.

I started on the patties yesterday.  Pork, onion, bell pepper, celery, salt, cayenne pepper, and black pepper were all combined in a pot and simmered for about an hour, until the pork was cooked through and tender. 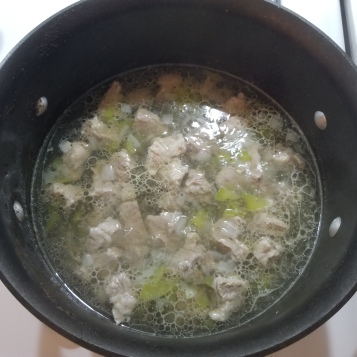 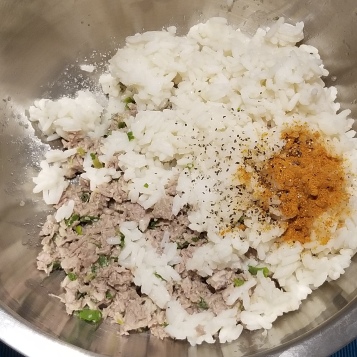 The mixture was drained, and then pulsed in the food processor a few times before being mixed with white rice, and more salt, pepper, and cayenne.

This morning I started by forming the pork mixture into patties, dredging them through a beaten egg/Tabasco mixture and bread crumbs, and then frying them in peanut oil until browned and heated through. 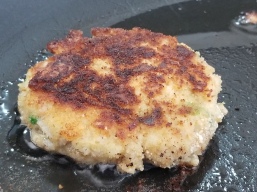 The process actually took quite a while, and it was tough to keep the patties together while transferring them from egg to bread crumbs to frying pan.

Once the patties were finally done, everything moved a lot faster.

Hollandaise sauce was next, and was made in a double boiler.  It involved whisking together egg yolks, lemon juice, salt, and water until it was slightly thickened and paler in color.  Then butter and chopped up tasso or spiced ham is added.

I was not able to find tasso OR spiced ham in LA, so I used Canadian bacon instead.  Of course it was less spicy than it should have been, but I do what I can with what I have!

Finally, the last step: frying eggs.  This was really just eggs frying in butter over the stove.

To serve, the eggs and patties were placed on the plates, and then the Hollandaise sauce was spooned over top.  I was supposed to sprinkle with cayenne pepper as well, but was in a rush to get breakfast on the table and forgot.

This was A LOT of effort.  Unfortunately it was really, really good and I’m going to have to make it again.  *sigh* oh well.

The Boudin patties were definitely the best part of this recipe.  The slight spiciness was perfect, and the herbs mixed in worked very well.

The patties were the toughest part, but they were the most worth it.  They involve quite a few steps – chopping, boiling, pulsing in processor, mixing, forming, coating in egg and bread, and finally frying.  I found the toughest part to be getting the darn things to stay together!

Hollandaise was second place when it came to difficulty, but wasn’t nearly as challenging.  It just required a lot of constant whisking.  And the eggs were quite simple.

There are a ton of ingredients in this one, but it serves eight people.

Be sure to make the white rice ahead of time!  It’s listed as “cooked rice” in the ingredients, so I recommend preparing it while you wait an hour for the pork to cook.

If you don’t want to include pork liver, as the recipe calls for, you can substitute with extra pork shoulder instead.  It should not make a big difference to taste.

This recipe can be easily cut in half if you have a smaller group to feed.